Rab31 is a member of the large Rab protein family (66 human members) of the Ras superfamily of small GTPases. Rab31 is expressed fairly ubiquitously in normal human tissue and regulates membrane traffic between the Golgi\/TGN and the plasma membrane and\/or endosomes. Dysregulated expression of Rab31 has not only been observed in several types of cancer, including breast, ovarian, cervical and liver cancer as well as glioblastoma, but also in skin diseases such as psoriasis and atopic dermatitis.

Cloning: A human cDNA encoding for Rab31 was first isolated in 1996 (Chen et al. 1996, Bao et al. 1996). Chen et al. (1996) isolated a cDNA encoding for a novel human Rab protein from a human melanocyte cDNA library and human melanocytes. Since its sequence showed a significant homology to canine Rab22 it was named Rab22B. A BLAST analysis revealed that Rab22B shared 71% identity and 82% similarity with canine Rab22. Around the same time, Bao et al. (1996, 1997) identified a cDNA encoding for a previously unknown human Rab protein in human platelets. Because the accepted guideline for the use of the next available Rab numbers at that time was an identity less than 85%, the new protein was named Rab31 instead of Rab22B (Chen et al. 1996; Bao et al. 2002).
Rodriguez-Gabin et al. (2001) identified a Rab sequence (rRab22B) cloned from a rat oligodendrocyte cDNA library with a high identity to human Rab31. Since comparison of the rRab22B sequence with human Rab31 (on the protein level) showed 88% identity it has been suggested that rRab22b encodes the rat homolog of human Rab31. In view of the fact that a segment of the carboxy-terminal domain shows 9 differences among the last 18 residues, one must, however, consider that rRab22B (and also murine Rab22B which is 97.9% identical with rRab22B) still may encode a new member of the Rab family, especially, because the carboxy-terminal end is part of the motif responsible for the targeting of Rab proteins to specific membrane compartments (Rodriguez-Gabin et al. 2001). Despite of this notion the authors refer to rRab22B as Rab31 (Rodriguez-Gabin et al. 2009).

Figure 2. Primary and tertiary structure of Rab31 (A) Sequence alignment of Rab31 and the other members of the so-called group II of the human Rab family (Klöpper et al. 2012). Secondary structure is shown for Rab31 for β-strands (yellow arrows) and α-helices (red helices). Highly conserved residues are displayed with a grey background, the composite binding sites for guanine nucleotides and Mg2+ is (aa 12-19, 60-64, and 118-121 of Rab31) are marked with a green background. Ser35 (indicated by a red triangle) has been mapped as phosphorylation site (www.phosphosite.org). The C-terminal region (~ 30 aa) is hypervariable except the two invariant cysteine residues to which geranylgeranyl moieties are post-translationally attached for membrane association. Black dots within the sequences of Rab17, 20, 21, and 24 indicate unique larger insertions not present in the other Rab proteins of the group II superfamily.

The coding sequence of human Rab31 corresponds to a 194 amino acid (aa) protein with a nominal molecular mass of 21.6 kDa and a pI of 6.7.
The crystal structure of human Rab31 bound to a non-hydrolyzable GTP analog, guanosine-5-(β γ)-imidotriphosphate (GppNHp) at 2.8 Å was described by Tempel et al. (2006) and is presented in Fig. 2A. Rab31 possesses a typically GTPase fold, composed of a six-stranded β-sheet core flanked by five α-helices. The binding site for guanine nucleotides and Mg2+ is well conserved among Rab proteins (Fig. 2B; aa 12-19, 60-64, and 118-121). The GTPase fold is followed by a hypervariable region, which harbors two cysteine residues to which geranylgeranyl moieties are covalently attached. Modification by geranylgeranylation is required for its proper subcellular localization, mainly the trans-Golgi network (Chua and Tang 2015). 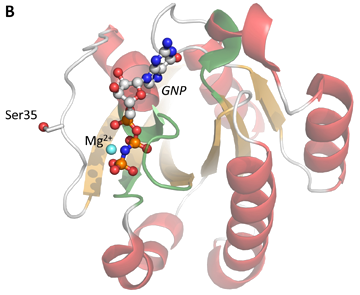 (B) Crystal structure of human Rab31 bound to the non-hydrolyzable GTP analog GppNHp/ GNP (Tempel et al. 2006). β-strands are indicated in yellow, α-helices in red; the composite binding site for guanine nucleotides and Mg2+ (cyan sphere) is marked in green. The side chain of Ser35, which is a target for phosphorylation is indicated as well. The two C-terminal cysteines, which are modified by prenylation, are not defined in the crystal structure.

Most normal cells display weak to moderate cytoplasmic staining, in a few cases of peri-nuclear staining (Human Protein Atlas). Within the cytoplasm, Rab31 was shown to be localized mainly in the Golgi, the trans-Golgi network (TGN) and endocytic compartments (Rodriguez-Gabin et al. 2001). 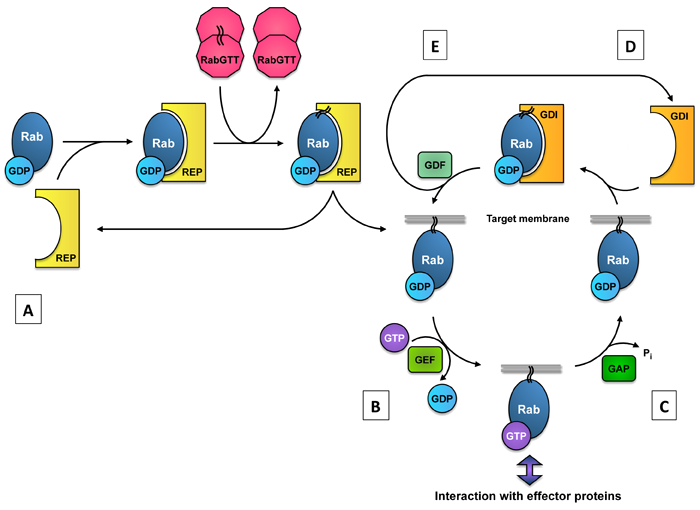 Rab31 belongs to the large Rab protein family (66 human members) of the Ras superfamily of small GTPases. The Rabs can be subdivided into six supergroups, with human Rab31 belonging to group II encompassing nine human members: the quadrupled Rabs RAB5A, RAB5B, RAB5C, and RAB17; the duplicated RAB31 and RAB22A; the duplicated RAB24 and RAB20; as well as RAB21 (Klöpper et al. 2012). Rab31 displays 71.1% identity (86.1% similarity) with Rab22A, whereas for the other members of the superfamily the identity ranges from about 35-45% (with similarities between about 70-78%). An alignment of the nine members of the group II superfamily is given in Fig. 2B. 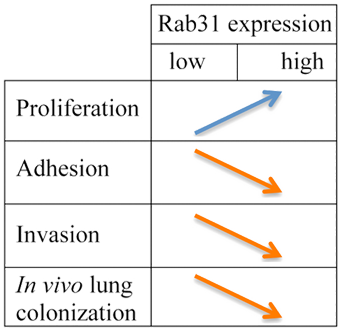