The main processed mRNA is 1514 bp. It encompasses exons 1-8. The 70-amino acid cold-shock domain (CSD) is encoded separately by exons 2-5. Four additional splice variants in human were predicted (Ensembl), two of which (YBX1-004 and YBX1-201) preserve exons 2 and 3 coding for core elements of the CSD, the RNP1 and RNP2 motifs, respectively. An alternative transcript for ctYB-1, the YBX1 homologous gene in C. tentans, has been reported (Nashchekin et al., 2007). 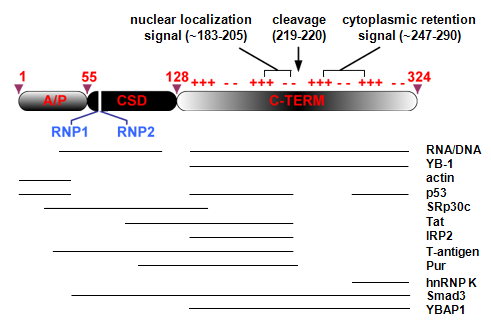 The YBX1 gene encodes the Y-box protein 1 (YB-1) which consists of 324 amino acid residues and has the isoelectric point 10.3. Theoretical MW is 35924, however YB-1 is known to migrate as a ~45-50 kDa protein in SDS-polyacrylamide gels due to its anomalous electrophoretic mobility. YB-1 belongs to the family of multifunctional DNA/RNA binding proteins that are highly conserved throughout evolution and found in eukaryotes, prokaryotes and archaea. The most conserved region in YB-1 is the 80 amino acid CSD which exhibits >40% identity and >60% similarity to the major E. coli cold shock protein CspA (Matsumoto and Wolffe, 1998; Sommerville, 1999). The CSD possesses RNP1 and RNP2-like consensus motifs and is represented by a five-stranded beta-barrel structure which creates a surface rich in aromatic and basic amino acids that may act as a large nucleic acid-binding site (Wolffe et al., 1992; Wolffe, 1994). The CSD has a preference for binding single-stranded pyrimidine-rich sequences. The N-terminal AP domain of YB-1 is similar to that found in several other transcription factors and may thus be important for its transcriptional activity. This region is also essential for interaction with p53 and modulation of p53-mediated transcription (Okamoto et al., 2000), and for association with actin microfilaments and mRNA compartmentalization (Ruzanov et al., 1999). The C-terminal region of YB-1 is responsible for sequence-nonspecific binding to DNA and RNA and mediation of protein-protein interactions (Wolffe, 1994; Sommerville and Ladomery, 1996). An inverted CCAAT-box found in HLA class II gene promoters, a so-called Y-box, was originally determined as the YB-1 binding motif (Didier et al., 1988). Later studies have concluded that YB-1 rather recognizes the DNA structure than a defined nucleotide sequence, making prediction of its target genes not feasible with conventional in silico analyses (Swamynathan et al., 1998). YB-1 is also capable of unwinding DNA and RNA duplexes, especially those containing mismatches, thereby promoting strand exchange and formation of perfectly matched duplex structures (Skabkin et al., 2001; Gaudreault et al., 2004).

According to Human Protein Atlas, YB-1 is variably expressed in most normal human tissues. Its expression is elevated in multiple cancer types (Kohno et al., 2003).

YB-1 is highly homologous to human DbpA (12p13; expressed predominantly in heart and muscle) and DbpC/contrin (17p11; expressed exclusively in germ cells). They share greater than 90% identity within the CSD and a high degree of similarity in the N- and C-terminal domains, including C-terminal clusters of basic and acidic amino acids. Mouse orthologues are YB-1 (encoded by Ybx1; 99% overall aminoacid identity with human YB-1), MSY2 (Ybx2; ~93% identity with contrin) and MSY4 (~86% identity with DbpA).

Mutations in YBX1 are not reported.