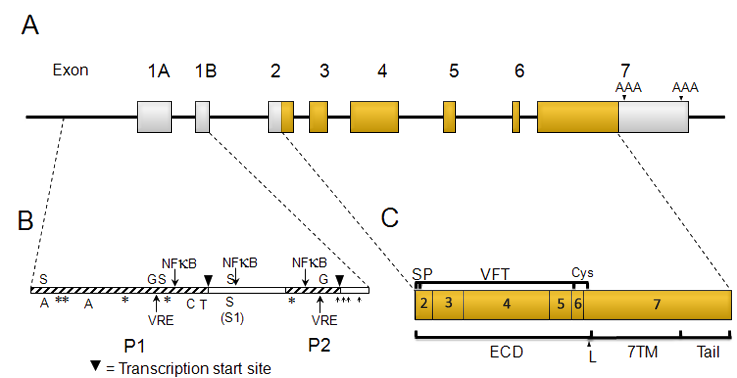 Figure 1. Schematic representation of the calcium-sensing receptor (CaSR) gene structure (A), promoter location and features (B) and protein structural arrangement (C). The CaSR mRNA is transcribed from part of exon 2, all of exons 3 to 6 and part of exon 7. Exons that comprise the CaSR protein are shaded yellow; untranslated exons are left unshaded. Note that intronic regions are not drawn to scale. The location of polyadenylation sites (AAA) within the untranslated region of exon 7 are arrowed. In B, the spatial relationship between promoters P1 and P2 (hatched) and untranslated exons 1A and 1B (unshaded) is highlighted along with the position of various transcription factor binding sites and regulatory elements: C, CCAAT box; T, TATA box; A, Ap-1 sites; *, serum response elements; VRE, vitamin D response elements; G, glial cells missing-2 response element; ↑, Sp1 sites; NFκB, NFκB response elements; S, STAT sites (S1 regulates IL-6 response). The CaSR protein (C) is composed of the extracellular domain (ECD) consisting of a signal peptide (SP), Venus Fly Trap (VFT) domain and cysteine-rich domain (Cys) connected by a small linker region (L) to the seven transmembrane domain (7TM) and intracellular tail, both encoded by exon 7.

The human CaSR gene maps to 3q13.3-21, is approximately 103 kb in length and contains 8 exons (exons 1A and 1B and exons 2-7) (Garrett et al., 1995; Janicic et al., 1995; Hendy et al., 2009). The full length CaSR protein is translated from part of exon 2, all of exons 3-6 and part of exon 7 (Figure 1). Exons 1A and 1B are not translated. An alternatively spliced, functional variant of the receptor lacking exon 5 has been reported (Rodriguez et al., 2005a). The CaSR gene has two promoters, an upstream promoter (P1) containing a TATA box and CCAAT box and an additional promoter (P2) with Sp1 sites that cluster near the transcriptional start site (Figure 1; Chikatsu et al., 2000; Canaff et al., 2008; Hendy et al., 2009). The two promoters yield alternative transcripts containing either exon 1A or exon 1B spliced to exon 2 (Chikatsu et al., 2008; Hendy et al., 2009). Both promoters contain vitamin D response elements as well as response motifs for NF-κB and glial cells missing-2 (Canaff and Hendy, 2002; Canaff and Hendy, 2005; Canaff et al., 2009). The upstream promoter region contains Stat1/stat3 elements which allow for response to interleukin-6 (Canaff et al., 2008). Use of differential polyadenylation signals in exon 7 appear to lead to at least two different-sized 3 untranslated regions (Figure 1; Garrett et al., 1995).

The full length human CaSR mRNA encodes a protein of 1078 amino acids consisting of a 612 amino acid signal peptide/extracellular domain (ECD), a 250 amino acid seven transmembrane domain (7TM) and an unusually long 216 amino acid intracellular tail (Garrett et al., 1995; Hu and Spiegel, 2003) (Figure 1). The NH2-terminal signal peptide is 19 amino acids in length and directs the nascent protein to the endoplasmic reticulum (ER) where it is subsequently removed (Hu and Spiegel, 2003; Pidasheva et al., 2005; Hendy et al., 2009). The ECD is composed of a bilobed Venus flytrap (VFT) domain followed by a cysteine-rich domain connected via a peptide linker region to the 7TM which in addition to the membrane α-helices also contains three intra- and three extra-cellular loops; the final TM α-helix is connected to the intracellular tail, the membrane proximal domain of which is important for receptor cell expression and intracellular signalling (Ray et al., 1997; Hu and Spiegel, 2003). The CaSR protein is processed as a dimer in the ER via covalent intermolecular disulphide bonds and hydrophobic interactions and functions as a dimer when mature (Bai et al., 1998; Bai et al., 1999; Zhang et al., 2001; Pidasheva et al., 2006). Essentially, agonist binding to a cleft between the VFT lobes of each monomer leads to their closure and rotation about the VFT dimer interface thus transmitting a conformational change to the cysteine-rich domain which in turn allows movement of the 7TM α-helices with respect to one another resulting in connection of G proteins to the intracellular loops and initiation of signalling pathways (Hu and Spiegel, 2003). The CaSR contains 11 potential N- linked glycosylated sites in the ECD and is glycosylated in the ER with high mannose carbohydrates (immature receptor) after which it is transported to the Golgi where it is further modulated with complex carbohydrates (mature receptor) (Ray et al., 1998). Western blot analysis of protein extracted from cells containing mature and immature CaSR reveal bands at 150 kDa and 130 kDa, respectively. The CaSR contains five potential sites for protein kinase C phosphorylation, two in intracellular loops 1 and 3 and three in the intracellular tail and two potential sites for protein kinase A phosphorylation in the intracellular tail (Garrett et al., 1995; Bosel et al., 2003).

The CaSR was first cloned from bovine parathyroid cells by Brown and coworkers in 1993 and the human receptor was cloned from an adenomatous parathyroid gland in 1995 (Brown et al., 1993; Garrett et al., 1995). The CaSR is a G protein-coupled receptor belonging to Group II of Family C, G protein-coupled receptors and conforms to a typical G protein-coupled receptor structure with a large extracellular domain, a seven transmembrane spanning domain and a rather large intracellular tail (Brown and MacLeod, 2001; Hu and Spiegel, 2003). The CaSR is promiscuous, activating a variety of signalling pathways via a host of ligands (in addition to Ca2+) in a cell/tissue type-specific manner (Brown and MacLeod, 2001; Magno et al., 2011b). The receptors primary function is in the maintenance of calcium homeostasis in the body, but other functions have more recently come to light (see below).

The CaSR has a widespread tissue distribution in the body including those tissues which are important in the maintenance of calcium homeostasis, namely the chief cells of the parathyroid gland where it is responsible for regulating parathyroid hormone (PTH) secretion, the C cells of the thyroid whereby it controls calcitonin secretion, the kidney where it controls calcium reabsorption, the placenta whereby it controls calcium transport from mother to foetus and in cartilage and bone cells, (chondrocytes, osteoblasts and osteoclasts) in which it has important effects on the laying down and maintenance of the skeleton (Magno et al., 2011b; Riccardi and Kemp, 2012). The CaSR is also expressed in intestinal epithelial cells where it serves to regulate intestinal uptake of calcium by directly modulating responsiveness to 1,25-dihydroxyvitamin D (Egbuna et al., 2009). Apart from tissues which regulate calcium homeostasis, the CaSR is also expressed in many tissues outside this realm including the breast, ovary, uterus, testis, prostate and germ cells, the tongue, oesophagus, stomach and pancreas as well as the heart, various parts of the brain (including the subfornical organ and olfactory bulbs, hippocampus, hypothalamus and cerebellum), pituitary, lens epithelium and skin (Brown and MacLeod, 2001; Magno et al., 2011b; Riccardi and Kemp, 2012). The function of the CaSR in many of these tissues is still largely unknown.

As expected for a G protein-coupled receptor, the CaSR localizes to the plasma membrane of the cells in which it is expressed. However, there is accumulating evidence for a large intracellular pool of receptor that localizes to the ER/Golgi awaiting agonist driven trafficking to the plasma membrane, a mechanism thought to regulate membrane CaSR abundance in the chronic presence of agonist (Grant et al., 2011). While the CaSR does undergo endocytosis and is targeted to the lysosome, it does not undergo substantial desensitization and recycling as occurs with many other G protein-coupled receptors (Grant et al., 2011). In the chief cells of the parathyroid gland, CaSR is located in caveolae, flask-like invaginations of the plasma membrane that contain various signalling molecules and scaffolding proteins such as filamin-A and caveolin-1 to which the CaSR is anchored (Kifor et al., 1998). In various parts of the kidney tubule (proximal tubule, cortical thick ascending limb, distal convoluted tubule, medullary collecting duct) the membrane bound CaSR may be located apically or basolaterally or both depending on its specific function(s) in these compartments (Riccardi and Kemp, 2012). For example, the apically located CaSR in the medullary collecting duct inhibits insertion of AQP2 water channels and promotes activation of the B1 subunit of the vacuolar H+-ATPase in the apical membrane, thus delivering a less concentrated and more acidified urine (Sands et al., 1998; Procino et al., 2004; Riccardi and Kemp, 2012). Likewise in the gastrointestinal tract, the CaSR is expressed both on the apical and basolateral membranes of the gastrin secreting G cells of the stomach indicating that it can sense and respond to nutrient levels both in the lumen and in the blood, whereas CaSR in colonic epithelial cells, whether it is expressed apically or basolaterally, can mediate cAMP-mediated fluid secretion (Conigrave and Brown, 2006).

The human and bovine CaSR share significant homology (greater than 90% at the amino acid level) with CaSRs from other mammals such as rodents, rabbits and cats (Garrett et al., 1995; Brown and MacLeod, 2001; Gal et al., 2010). Even CaSRs from chickens and the mudpuppy (an amphibian) share approximately 80% amino acid identity underscoring the functional importance of this receptor throughout the animal kingdom (Brown and MacLeod, 2001). The CaSR belongs to Family C of the G protein-coupled receptors, members of which share at least 20% amino acid homology in their seven transmembrane domains (Brauner-Osborne et al., 2007). Group I of Family C comprise the metabotropic glutamate receptors (mGluR 1-8) whereas the CaSR belongs to Group II which also contains the vomeronasal and taste and odorant receptors and various orphan receptors including GPRC6A (the most closely related to the CaSR). Group III comprises the gammabutyric acid (GABAB) receptors). Interestingly, the CaSR can heterodimerize with mGluR and GABAB receptors resulting in receptor units with unique pharmacological profiles (Gama et al., 2001; Cheng et al., 2007). The ECD including the VFT of the Family C GPCRs shares homology with bacterial periplasmic nutrient-binding proteins (PBPs) and Family C GPCRs are thought to have evolved from fusion of an ancient PBP-like structure (forming the ECD) with an independently derived seven transmembrane domain entity (Brown and Macleod, 2001).

Heterozygous, germinal mutations in the CaSR may be activating or inactivating leading to the familial conditions of altered calcium sensing, autosomal dominant hypocalcaemia (ADH) and familial hypocalciuric hypercalcaemia (FHH), respectively (Pollak et al., 1993; Pollak et al., 1994). These disorders are usually benign and may often be asymptomatic, although in rare cases severe activating mutations of the CaSR may give rise to Bartters syndrome subtype IV (Vargas-Poussou et al., 2002). On the other hand, the homozygous presence of inactivating mutations or compound heterozygous mutations affecting both alleles of the CaSR gene give rise to the rare, but much more serious condition, neonatal severe hyperparathyroidism (NSHPT), that normally requires surgical intervention (usually sub-total parathyroidectomy) in the neonate (Pollak et al., 1993; Ward et al., 2004; Ward et al., 2012). Reported mutations leading to ADH and FHH/NSHPT number around 65 and 140, respectively and may occur almost anywhere in the CaSR gene coding region, although there is a particular preponderance in exons 3 and 4 which encode part of the extracellular ligand-binding domain that includes the VFT, and the 5 end of exon 7 which encodes the seven transmembrane, signalling domain, including the extra- and intracellular loops (Hendy et al., 2009 and see database: CASRdb).