In 1979, a large molecular weight complex composed of adenosine deaminase (ADA) were reported to be found as an adenosine deaminase-binding protein (ADBP), also known as adenosine deaminase complexing protein-2 (ADCP2). In 1993, this adenosine deaminase-binding protein is determined to be identical to CD26, a T-cell activation molecule and a 110-kD glycoprotein that is present also on epithelial cells of various tissues including the liver, kidney, and intestine. The CD26 cDNA contains a 3465 bp open reading frame that encodes a 766 amino acid protein. The CD26 amino acid sequence has 85% amino acid identity with the mouse and rat CD26 genes and 37% amino acid identity with D. melanogaster. Two CD26 transcripts (4,2 and 2,8 kb) were found, both of which were expressed at high levels in the placenta and kidney and at moderate levels in the lung and liver. However, only the 4,2 kb mRNA was expressed at low levels in skeletal muscle, heart, brain, and pancreas. 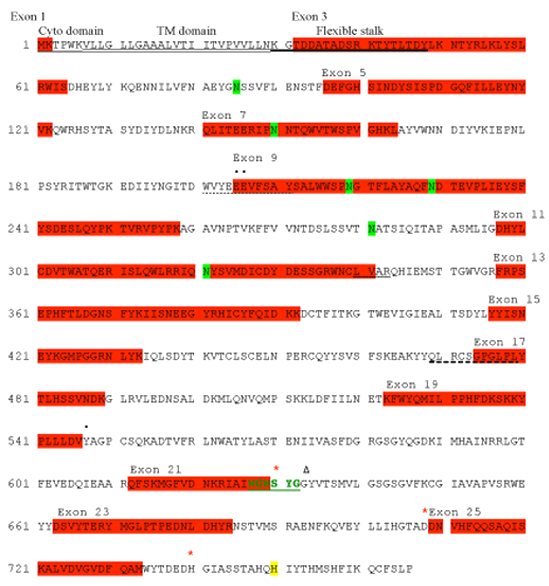 The 5-flanking region does not contain a TATA box or CAAT box, commonly found in housekeeping genes. CD26 does contain a 300 base-pair G-C rich region with potential binding sites for NF-κB, AP2, or Sp1. CD26 expression is activated by interferons (IFNs) and retinoic acid in chronic lymphocytic leukemia (CLL) via Stat1α and the GAS response element (TTCnnnGAA located at bp -35 to -27) in the CD26 promoter. A hepatocyte nuclear factor 1 binding site at position -150 to -131 of the CD26 gene regulates CD26 expression in human intestinal (Caco-2) and hepatic epithelial (HepG2) cell lines.

CD26 is a multifunctional type II transmembrane serine peptidase that has an extracellular domain with DPPIV enzymatic activity and a short cytoplasmic domain. It interacts with extracellular molecules and is also involved in intracellular signal transduction cascades. CD26 is important in immunology, autoimmunity, HIV, diabetes, and cancer. Interacting directly with various other cell surface and intracellular molecules, CD26 can regulate receptor specificity via its DPPIV activity and the function of various chemokines and cytokines. CD26 is expressed at low density on resting T cells, but is upregulated with T cell activation. Therefore, CD26 may have an important functional role in T-cells and overall immune function. CD26 associates with other important immunologic cell surface receptors such as CD45, CD9 and CXCR4. The multifunctional activities of CD26 are dependent on cell type and intracellular or extracellular conditions that influence its role as a proteolytic enzyme, cell surface receptor, costimulatory interacting protein and signal transduction mediator; as well as its role in adhesion and apoptosis. 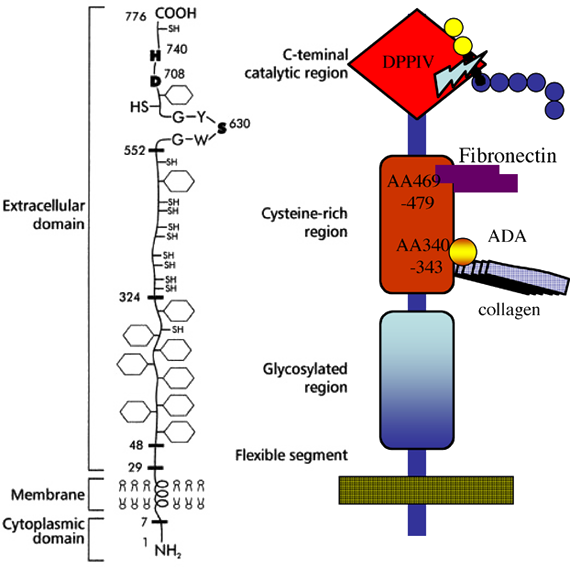 Schematic representation of CD26/DPPIV. Human CD26 is composed of 766 amino acids, including a short cytoplasmic domain of 6 amino acids, a transmembrane region of 24 amino acids, and an extracellular domain with dipeptidyl peptidase activity which selectively removes the N-terminal dipeptide from peptides with proline or alanine at the penultimate position. Single amino acid point mutation in the β-propeller motif identified Glu205 and Glu206 as essential for DPPIV enzyme activity, and the central tunnel and α/β-hydrolase domains both participate in DPPIV inhibitor binding. Single amino acid point mutation at His750 residue is responsible for dimerization.

Originally characterized as a T cell differentiation antigen, CD26 is preferentially expressed on a specific population of T lymphocytes, the subset of CD4+CD45RO+ memory T cells, and is upregulated following T cell activation. Besides being a marker of T cell activation, CD26 is also associated with T cell signal transduction processes as a costimulatory molecule. Recent work also suggests that CD26 has a significant role in tumor biology, being both a marker of disease behavior clinically as well as playing an important role in tumor pathogenesis and development. For instance, the association of CD26/DPPIV with such key molecules as topoisomerase IIα, p38 MAPK, and integrin β1, has important clinical implications, including its potential ability to regulate tumor sensitivity to selected chemotherapies and to influence tumor migration/metastases and tumorigenesis. DPPIV inhibitors enhance the effects of incretin hormones (glucagon-like peptide-1 (GLP-1) and glucose-dependent insulinotropic polypeptide (GIP)), increasing glucose-mediated insulin secretion and suppressing glucagon secretion. Therefore, DPPIV inhibitors, which act by inhibiting DPPIV, the enzyme that inactivates GLP-1 and GIP have been available as a new class of antidiabetes drugs. 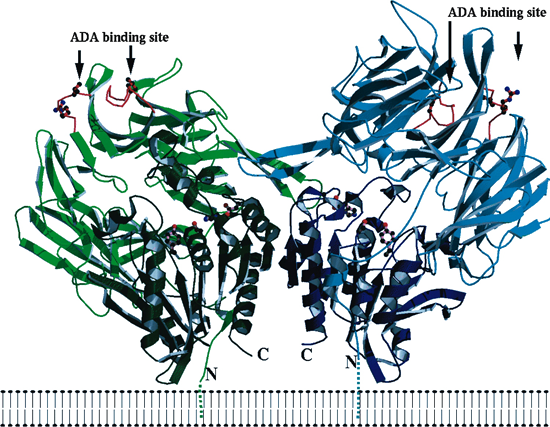 3-D structure of CD26/DPPIV. CD26/DPPIV forms a homodimer in the cell surface membrane. The residues 7-28 constitute the membrane spanning region. Each subunit consists of two domains, that is, an α/β-hydrolase domain and a β-propeller domain. The N-terminal β-propeller domain of CD26/DPPIV (residues 55-497) consists of 8 blades. β-strand 2 of blade 4 of the propeller extends into a small domain (residues 234-260) that includes an antiparallel two-stranded β-sheet. The function of this arm is to stabilize the dimeric structure. The catalytic site (Ser630-Asp708-His740) is located in a large cavity (also called a central tunnel), formed between the α/β-hydrolase domain and 8-bladed β-propeller domain, which contains the consensus sequence (DW(V/L)YEEE), that is common to S9b proteases. The central tunnel and α/β-hydrolase domains both participate in inhibitor binding. This figure is reproduced from Ralf Thoma et al., Structural Basis of Proline-Specific Exopeptidase Activity as Observed in Human Dipeptidyl Peptidase-IV, Structure 2003;8:947-959, with permission by Elsevier Limited.

CD26 is expressed in many tissues. Two CD26 transcripts (4,2 and 2,8 kb) are reported to be found, both of which were expressed at high levels in the placenta and kidney and at moderate levels in the lung and liver. The 4,2 kb transcript was expressed at low levels in skeletal muscle, heart, brain, and pancreas. Other organs expressing CD26 include: brain, endothelium, heart, intestine (colon adenocarcinoma, fetal colon expression disappears at birth), kidney, liver, lung, skeletal muscle, pancreas, and placenta. In the hematopoietic system CD26 is found on CD4+ T memory cells, CD8+ effector/memory T cells. It has been reported that 0-5% of freshly isolated CD20+ B cells do express the CD26 antigen. Following stimulation with PMA (phorbol 12-Myristate 13-acetate) or Streptococcus aureus protein, the fraction of CD26-positive cells increased to 51%. Meanwhile, CD26 is not expressed or is found only at low levels on monocytes of healthy adult. Flow cytometric analysis of dendritic antigen-presenting cells (DC) generated from peripheral blood of normal donors in the presence of granulocyte/macrophage colony-stimulating factor and

CD26 physically binds with ADA, an enzyme that plays a key role in the development and function of lymphoid tissues. ADA is essential for purine metabolism, with the loss of ADA leading to a clinical syndrome characterized by severe immunodeficiency. When the ADA inhibitor pentostatin was used in the treatment of recurrent T cell lymphomas, a significant reduction in circulating CD26+ T cells was observed in treated patients. This finding is consistent with the fact that there is a physical association between CD26 and ADA on the surface of T lymphocytes. CD26 also interacts with CD45RO, a tyrosine phosphatase with a critical role in T cell signal transduction, at lipid rafts in peripheral blood T lymphocytes to modify cellular signaling events. A lipid raft is a cholesterol-rich microdomain in cell membrane, which plays an important role in signal transduction in T-cell regulation. CD26 interaction with lipid rafts in peripheral blood T-cells influences key cellular signaling events. Non-activated peripheral blood T-cells treated with the anti-CD26 mAb 1F7 increased CD26 recruitment to lipid rafts, resulting in increased tyrosine phosphorylation of c-Cbl, Zap70, Erk1/Erk2, p56lck, and TCR-ζ. Interestingly, CD26 is associated with CD45 RA outside of lipid rafts in cord blood T cells, and the strong physical linkage of CD26 and CD45 RA may be responsible for the attenuation of cord blood T-cell activation signaling through CD26. In addition to cell surface expression, nuclear localization of CD26 has been reported in malignant mesothelioma and malignant T cell lines, and in human thyroid carcinomas, although little is known on the functional relevance of nuclear CD26. In addition to membrane bound CD26, soluble form of CD26 (sCD26) is also detected in the sera, urine, thoracic fluid and seminal fluid. sCD26 in the sera appears to be functioned as immune enhancing protein in antigen-presenting cell (APC).

CD26 is a co-stimulatory molecule for T-cell signal transduction. While CD26 expression is enhanced following activation of resting T cells, CD4+CD26high T cells respond maximally to recall antigens such as tetanus toxoid. Moreover, we have previously reproted that effector CD26-mediated costimulatory activity is exerted via its DPPIV enzymatic activity. In addition, CD4+ T cells with in vitro transendothelial migratory capacity appear to express high CD26, indicating a role for CD26 in the migration of T cells, and patients with autoimmune diseases such as multiple sclerosis, Graves disease, and rheumatoid arthritis (RA) have been found to have increased numbers of CD4+CD26+ T cells in inflamed tissues as well as in their peripheral blood, with enhancement of CD26 expression in these autoimmune diseases correlating with disease severity. Moreover, CD26highCD8+ T cells in humans belong to early effector memory T cells, and CD26highCD8+ T cells increase expression of granzyme B, TNF-α (tumor necrosis factor-α), IFN-γ and Fas ligand, and exert cytotoxic effect with CD26-mediated costimulation. CD26 binds to caveolin-1 on APC, and residues 201 to 211 of CD26 along with the serine catalytic site at residue 630, which constitute a pocket structure of CD26/DPPIV, contribute to binding to the caveolin-1 scaffolding domain. This region in CD26 contains a caveolin-binding domain (ΦΧΦΧΧΧΧΦΧΧΦ; Φ and Χ depict aromatic residue and any amino acid, respectively), specifically WVYEEEVFSAY in CD26. These observations strongly support the notion that DPPIV enzyme activity is necessary to exert T-cell costimulatory activation via CD26 as demonstrated in our previous report using CD26 specific mAbs. The cytoplasmic tail of CD26 is responsible for T-cell costimulation induced by anti-CD3 plus caveolin-1. It has been identified that CARMA1 binds to the cytoplasmic tail of dimeric CD26, and that a PDZ domain in CARMA1 is necessary for binding to CD26. Following its phosphorylation, CARMA1 functions as a signaling intermediate downstream of PKCθ and upstream of IKK in the TCR signaling transduction pathway leading to NF-κB activation. Dimeric CD26, but not monomeric CD26, binds to CARMA1. The enzymatic pocket structure of the DPPIV catalytic site is necessary for binding of CD26 to caveolin-1, leading to the upregulation of CD86 expression on APC. Therefore, dimerization of CD26 is not only necessary for binding to caveolin-1, but also serves as a scaffolding structure for the cytoplasmic signaling molecule CARMA1. Overall, CD26 ligation by caveolin-1 on APC recruits CD26-interacting CARMA1 to lipid rafts, resulting in the formation of a CARMA1-Bcl10-MALT1-IKK complex, and this membrane-associated Bcl10 complex then activates IKK through ubiquitination of NEMO.
DPPIV inactivates incretin hormone (glucagon-like peptide-1 (GLP-1) and glucose-dependent insulinotropic polypeptide (GIP)). Therfore, DPPIV inhibitors enhance the effects of GLP-1 and GIP, increasing glucose-mediated insulin secretion and suppressing glucagon secretion. In this regard, DPPIV inhibitors are now avalilable worldwide for use of an antidiabetic drug. Moreover, DPPIV cleaves many cytokines and chemokines, which are summerized in Table 1. Morimoto et al. showed that proinflammatory cytokines such as TNF-α or IL-1β reduce expression of CD26 in microvascular endothelial cells, and that genetical or pharmacological inhibition of CD26/DPPIV enhances endothelial growth both in vitro and in vivo. These data strongly suggest that this effect of DPP-4 inhibition on endothelial growth may be of potential use in treating diabetic vascular complications, as well as diabetes itself. 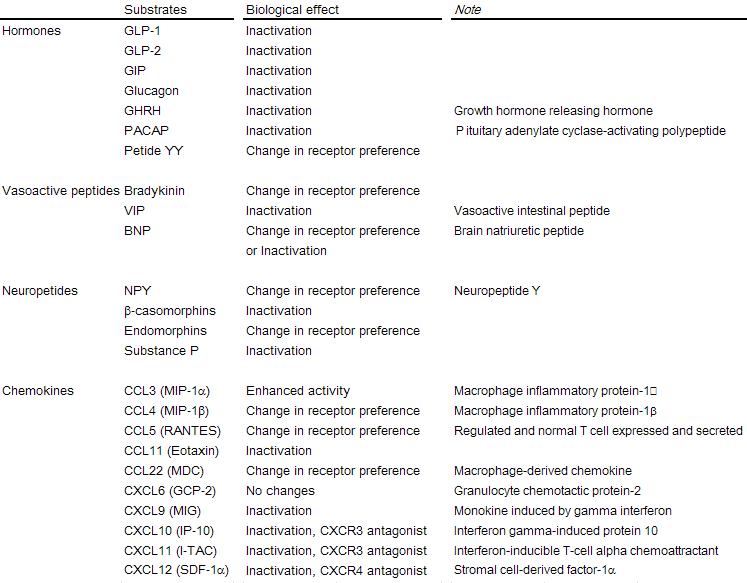